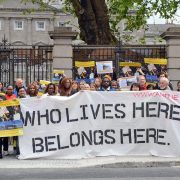 On 3rd December 2021, the Minister for Justice announced a new scheme which will enable many undocumented migrants to apply to regularise their residency status.

The scheme will open for online applications in January 2022 and applications will be accepted for six months.

The scheme will include those who do not have a current permission to reside in Ireland, whether they arrived illegally or whether their permission expired or was withdrawn years ago.

In order to be eligible, applicants must have been undocumented for a period of four years, or three years in the case of those with dependent children.

Applicants must meet standards regarding good character, though having convictions for minor offences will not, of itself, result in disqualification.

There will be no requirement for applicants to demonstrate that they would not be a financial burden on the State, as the scheme is aimed at those who may be economically and socially marginalised as a result of their undocumented status.

The scheme will also be open to individuals with expired student permission, those who have been issued with a section 3 notice under the Immigration Act 1999, and those who have received deportation orders.

The scheme is also expected to include international protection applicants who have been in the asylum process for a minimum of 2 years, though full details on this are yet to be announced.

Successful applicants will be granted residence permission which will allow access to the labour market and will provide a pathway to Irish citizenship.

Announcing the scheme, the Minister for Justice Helen McEntee stated:

“I’m delighted that the Government has approved my proposal for this momentous, once-in-a-generation scheme.

Given that those who will benefit from this scheme currently live in the shadows, it is difficult to say how many will be eligible, but we are opening this scheme for six months from January to allow people come forward and regularise their status.

It will bring some much-needed certainty and peace of mind to thousands of people who are already living here and making a valuable contribution to our society and the economy, many of whom may be very vulnerable due to their current immigration circumstances.”

As a result, they may be reluctant to seek medical assistance when ill, assistance from An Garda Síochána when they are the victim of a crime, or a range of other supports designed to assist vulnerable people in their times of need.”

I believe that in opening this scheme, we are demonstrating the same goodwill and generosity of spirit that we ask is shown to the countless Irish people who left this island to build their lives elsewhere.”

Studies suggest that there are 17,000 undocumented persons in the State, including up to 3,000 children.

Berkeley Solicitors welcomes the announcement of this scheme, which will allow many undocumented migrants to come forward and apply to regularise their status.