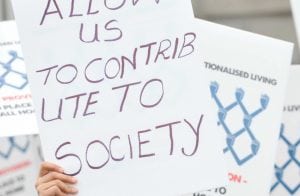 The Government is to lift some of the restrictions facing asylum-seekers seeking work and allow for greater access to social welfare payments and alternative accommodation. Last May it was declared by the Supreme Court that the ban on asylum seekers entering employment was unconstitutional “in principle” and the cabinet agreed to lift the ban last November, in line with a European directive.

Currently asylum-seekers who are in direct provision in Ireland currently have a weekly allowance of €21.60 and can buy food using a recently introduced points system. As of December 2017, there are 5,096 people within direct provision. Before the 20-year-old ban preventing people seeking asylum from working was lifted the direct provision program was undeniably restrictive and rigid. About 3,000 people face a wait of about a year and a half for a decision on their asylum claim.

The proposals regarding the conditions under which the ban will be lifted will be announced by Mr Flanagan and Minister of State David Staunton. The proposals come a year after the Supreme Court found the ban on asylum seekers working in this country was unconstitutional. The ban however is not lifted in its entirety. There are still restrictions on certain occupations that cannot be accessed by asylum-seekers within direct provision. Asylum seekers will be able to seek any form of employment except with An Garda Síochána, the Defence Forces or the Civil Service.

Government claim the decision to deny access to the Garda, the Defence Forces and the Civil Service was due to the permanent nature of the positions. “It is not clear whether all asylum seekers will become permanent residents and therefore until that is clear, they will not be in a position to work in those three sectors. However, they will be able to work elsewhere.” With this in mind it is still a massive step forward regarding the status of asylum-seekers. Access to social welfare payments will also be permitted to those who find employment.

Granting people, the right to work brings Ireland into line with other European countries. The governments justification for the ban in Ireland has been that it will create a pull factor, increasing the number of asylum seekers looking to seek refuge in Ireland. It is the topic of constant debate.

People can also be asked to pay towards the cost of their direct provision accommodation if their earning exceeds certain limits, but this contribution will be capped at around €35 per

day, the cost to the state of providing direct provision per person. If a person is granted permission to gain employment and have been working for over 12 weeks, their direct provision allowance of €21.60 will be reduced or withdrawn. Children’s allowance will not have their allowance taken and will not be charged for their accommodation if their parents are working.

We at Berkeley Solicitors also welcome this development which we submit now brings Ireland in line with our legal obligations towards asylum seekers. We believe that it is logical that asylum seekers are given the opportunity to support themselves while they await the outcome of their application for protection. It will also create a fairer and more humane asylum system.