Tag Archive for: leave to land 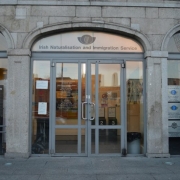 On the 26th September 2019, the Irish Naturalisation and Immigration Service of the Department of Justice released its annual report for the year 2018 detailing immigration trends in Ireland through statistics.

This is a very large number of persons refused leave to land with the top countries to have people rejected being:

Leave to land is governed by Section 4 of the Immigration Act 2004 (as amended) which provides for limited and specific circumstances to which persons can be refused leave to land. Under Section 4(3), an immigration officer retains a right to refuse permission to a non-national where they are satisfied:

“(a) that the non-national is not in a position to support himself or herself and any accompanying dependents;

(b) that the non-national intends to take up employment in the State, but is not in possession of a valid employment permit

(e) that a non-national, not being exempt, is not the holder of a valid Irish visa;

(f) that the non-national is the subject of- (i) a deportation order, (ii) an exclusion order or (iii) a determination by the minister that it is conducive to the public good that he or she remain outside the State;

(g) that the non-national is not in possession of a valid passport or other equivalent document, issued by or on behalf of an authority recognised by the Government, which establishes his or her identity and nationality;

(i) that the non-national, having arrived in the State in the course of employment as a seaman, has remained in the State without the leave of an immigration officer after the departure of the ship in which he or she so arrived;

(j) that the non-national’s entry into, or presence in, the State could pose a threat to national security or be contrary to public policy;

There remain serious deficiencies in our immigration system with respect to fairness and the right to have legal representation as a person presenting at the Irish border requesting leave to land.

The absence of legal representation is especially concerning given the seriousness of the decision being made. Refusals of leave to land remains a serious incident in a person’s immigration history. It must be declared for all future visa applications and may be negatively considered in any future immigration matter. Needless to say, being refused leave to enter Ireland at the border can be extremely distressing and traumatising for individuals and in some cases has resulted in persons being detained in Irish prisons!

The increase in the number of persons refused leave to land may be unsurprising given that in 2017, INIS highlighted that enhancing border security was a priority stating that amendments to immigration over last number of years “will allow for arresting, detaining and removing non-nationals who are subject to a deportation order and people who are refused leave to land”, however it is no less alarming.

Although specific, the potentially very wide-ranging power of immigration officers must be exercised in a cautious and restricted manner. Unfortunately, it appears that leave to land refusals are continuing to increase.

The report also addressed citizenship applications confirming that, similar to the 2017 figures, 8225 persons received Citizenship Certificates in 2018, with 1183 of those being minors.

Of the 984 Family Reunification applications received in 2018, 527 were Syrian nationals. However, only 211 applications were determined favourably with just 133 minors at time of decision receiving positive decisions.

The 2018 Annual INIS Report can be read in full here.